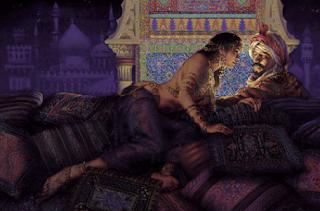 Tell me about the dream where we pull the bodies out of the lake
and dress them in warm clothes again.
How it was late, and no one could sleep, the horses running
until they forget that they are horses.
It’s not like a tree where the roots have to end somewhere,
it’s more like a song on a policeman’s radio,
how we rolled up the carpet so we could dance, and the days
were bright red, and every time we kissed there was another apple
to slice into pieces.
Look at the light through the windowpane. That means it’s noon, that means
we’re inconsolable.
Tell me how all this, and love too, will ruin us.
These, our bodies, possessed by light.
Tell me we’ll never get used to it.

On the poet: Richard Siken (1967 – Present) lives and works in Arizona. ‘Scheherazade’ is from his collection of poems titled ‘Crush’ – the themes of which center around love and obsession. Published in 2005 it had earlier won the ‘Yale Series of Younger Poets Competition’ in 2004, in addition to receiving several other recognitions.

He has since released a second collection of poems – ‘War of the Foxes’.

On this poem: Let me be honest – this poem entranced me from my first reading. Perhaps I found it all the more fascinating because I didn’t have a clue as to what he was talking about. And I still don’t. Neither does there seem to be any other definitive analysis of this poem. So, what I can offer is only my own cock-eyed interpretation with no expert authority backing it.

Let’s start with the title, shall we? Scheherazade is both a character and the narrator of ‘One Thousand and One Nights’, the famed anthology from Persia containing gems like the tales of Alaadin, Ali Baba, and others. A brief backdrop to Sheherazade – Sultan Shahryar of Persia has gone a bit demented since discovering his Queen’s infidelity. The cuckolded monarch thence decides to avenge himself on all womankind by marrying a virgin each day and having her beheaded the next morning. Enter Scheherazade – wise, witty, and courageous.

On her wedding night, Scheherazade beseeches the King to be allowed to tell her younger sister one last story. He agrees, and listens entranced to the tale she weaves. The Sultan receives no satisfaction on that night or the thousand nights that follow, because silver-tongued Scheherazade ends her tale each night on a cliff-hanger – ‘to be continued tomorrow night’.  The King’s burning desire to know how one story ended and hear the next one overcomes his unreasonable blood-lust. After the thousand and one nights are over, he is completely under the spell of Scheherazade. Her life is spared and she is made Queen. Presumably, Shahryar came to his senses and stopped being a homicidal maniac.

The lover begs the beloved for a story –

“Tell me about the dream…”
a story of a dream remembered, or good times past,

“Tell me how all this, and love…”
a story of love,

“Tell me we’ll never…”
a story of a love that will never fade with familiarity.

A story that is not like a tree with roots that need to end somewhere, but a melody that lingers in the mind even as its notes fade away.

A story of a love that seduces with its sensuality, pulling the lovers into a dance; brightening each day with rosy promise;

“and every time we kissed there was another apple to slice into pieces…”
a love that leads not to satiation, but to fresh discovery as desire is whetted.

“Look at the light through the windowpane. That means it’s noon, that means
we’re inconsolable…”
Night breaks into day and all stories need to have an end, though we wish it otherwise. Love will break our hearts; Love will be our ruination.

On a personal note: What snagged my interest on reading this poem was its intensity, and the underlying tone of despair. Apparently the poet has said that it was the death of his boyfriend in 1991 that led to his writing Crush.

“These our bodies possessed by light,
Tell me we’ll never get used to it.”
To get used to it…that moment that we get used to love is the moment we start taking it for granted. As long as we don’t ‘get used to it’, we cherish love for the rare gift it is.

In the normal course of events, time renders all things ordinary; love being no exception. The mundane is transformed into the magical when we live in the intense awareness that we - lover and beloved – are both vessels of light, each illumining the other.

Barring that sacred awareness, the story of Love, recaptured in the prism of memory and scattering its rainbow hues in glorious verse will have to serve as a stand-in.
Happy Valentine’s Day.
Posted by Noa at 7:06 AM